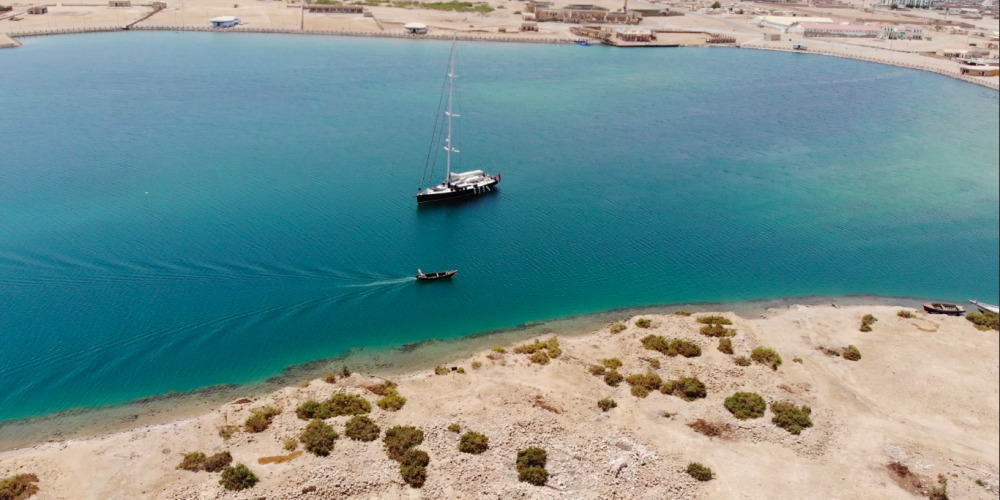 Everyone who attended the SW Trophy in Porto Cervo last June will remember how surprised and happy SW82 Ammonite’s owner Marcus Blackmore was to win the first Willy Persico Award. But not everyone will know that the yacht had just arrived days earlier after having sailed all the way from Singapore to Sardinia on her own keel in true Southern Wind style. The following is Captain Riccardo Benoni’s “behind-the-scenes” account of the journey.

How did you make a decision to start off on this adventure?

We had made arrangements for Ammonite to be shipped from Singapore to Genoa, but the cargo ship was late and couldn’t guarantee Ammonite’s arrival date in Italy. I knew that Ammonite’s owner, Marcus Blackmore, really wanted to participate in the SWS Rendezvous and Trophy in Sardinia in June both because he wanted to commemorate Willy and because he wanted to sail with his friends and that wonderful landscape. But I was losing faith in the shipping company, so I started thinking of an alternative plan. I knew that I had just seven weeks to do a 6500nm voyage and that the weather wasn’t on my side, but I felt in my heart that I could do the transfer, possibly in five weeks. I asked Marcus what he thought and explained our options: use the shipping company and miss the event in Sardinia or take the risk of sailing over. 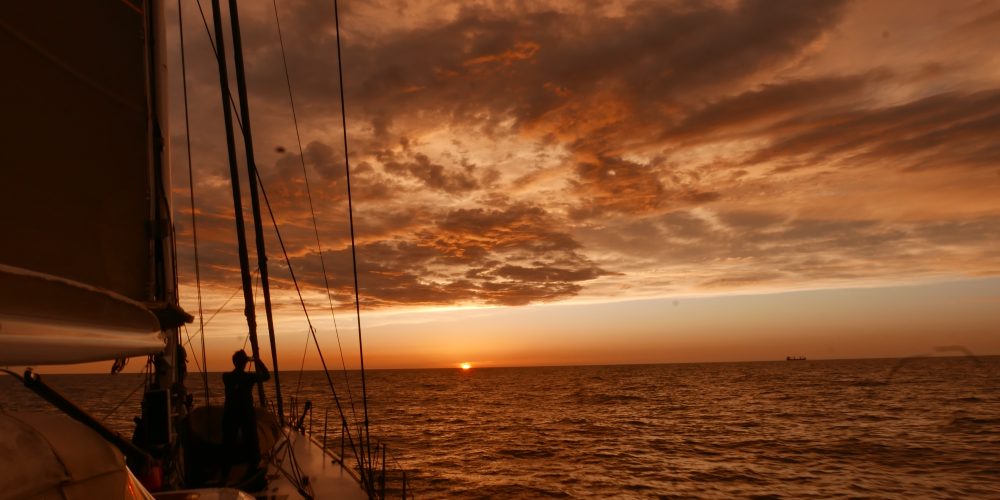 What were the biggest elements of risk involved in this transfer?

First of all, the weather. It was the “wrong “ time of year to be sailing in the Indian Ocean because there were two different monsoons coming through: we risked doldrums and/or tornados. There were more potential problems in the Red Sea: strong northerly winds, hard chop and very few places to shelter. I was also wondering where we would be able to get fuel without wasting time with paperwork. Safety was also a concern and I lost sleep before and during the transfer worrying about pirates and how we could handle an assault: we weren’t going to be sailing along politically stable shores. I was also worried about crew and the tight schedule. It takes time and careful planning to prepare a transfer like this plus I wanted to have the boat ready for racing. I was thinking that I’d have just five days between our arrival in Olbia and the beginning of the Trophy: would I be able to prepare a yacht that had just completed a circumnavigation for a regatta? How long would it take? But I pitched to do the transfer and Marcus gave me his thumbs up. Lots of people have asked why I took on the risk and the responsibility when the shipping was already paid for, but for me it was a question of getting the yacht where the owner wanted it, on time. Marcus had plans and objectives and I wanted to accept the challenge and get him what he wanted. Often during night watches I asked myself if I wasn’t just feeding my ego when I took on this challenge? Arrogance can make you think that you can control the wind and dominate the sea, it can make you forget when you’re a guest in a foreign land. When you’re sailing you’re in the hands of god, you never know what’s in store for you ahead. Was I forgetting these fundamental truths? 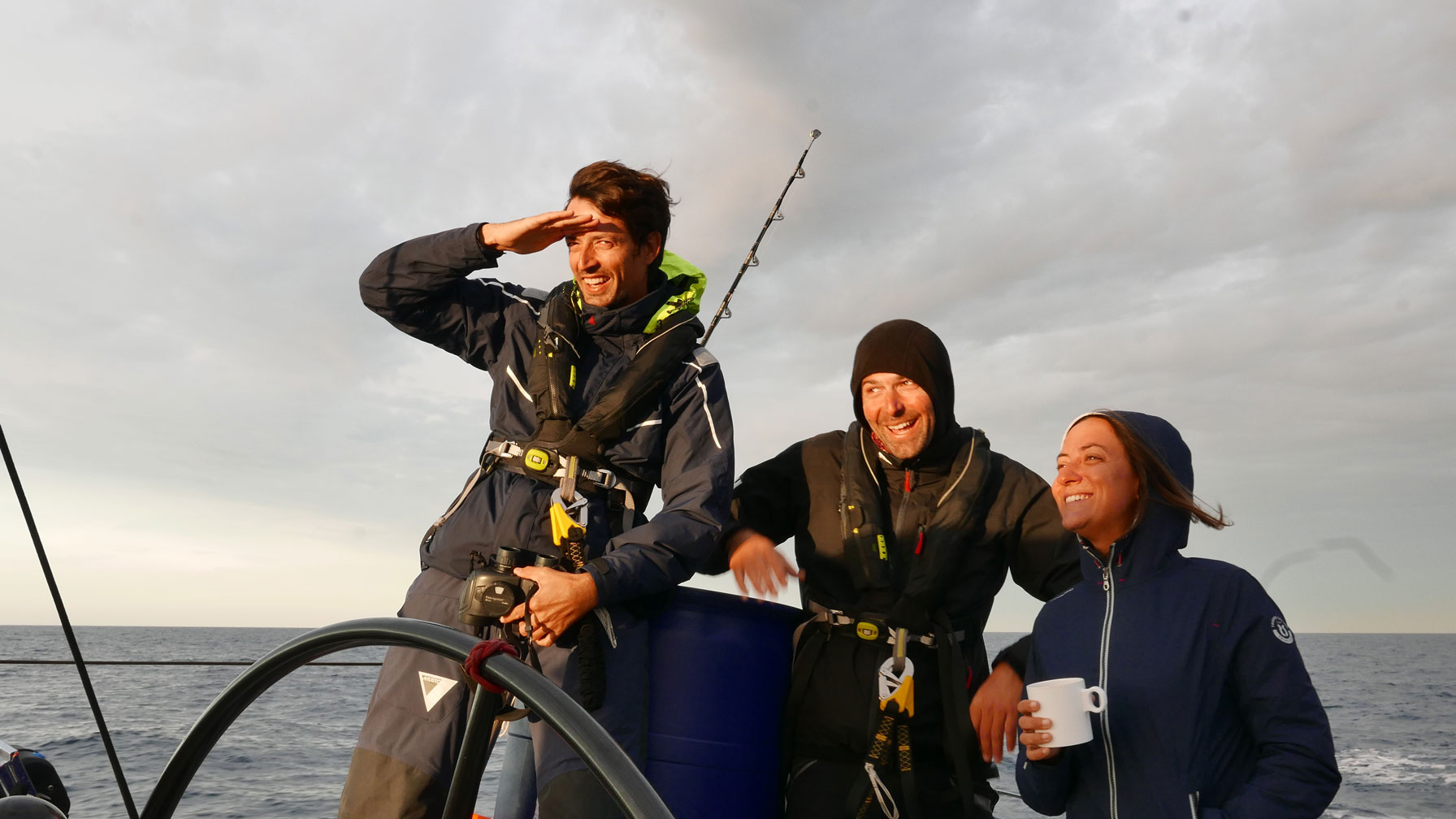 What did you do to prepare the yacht?

It was crazy! Marcus and I decided to do the delivery ourselves on Tuesday April 16th at noon. On Saturday the 20th at 8:00 AM we set sail. On the 16th the boat was ready and waiting to be loaded onto the cargo ship: no mast, no sails, no lines, no food, insurance and communications contracts suspended. I had prepared all the paperwork for shipping. Then our four days of hard work began.
During the day I worked alongside crew Lionel and Nicola to re-rig the boat. When it was dark they ran from supermarket to supermarket to provision the boat for seven people at sea for five weeks while I contacted our insurance and communications suppliers, looked for crew, and tried to figure out where we could refuel and shelter along the way. All we could do was to set sail with our tanks full of fuel and hope that the weather would be with us. 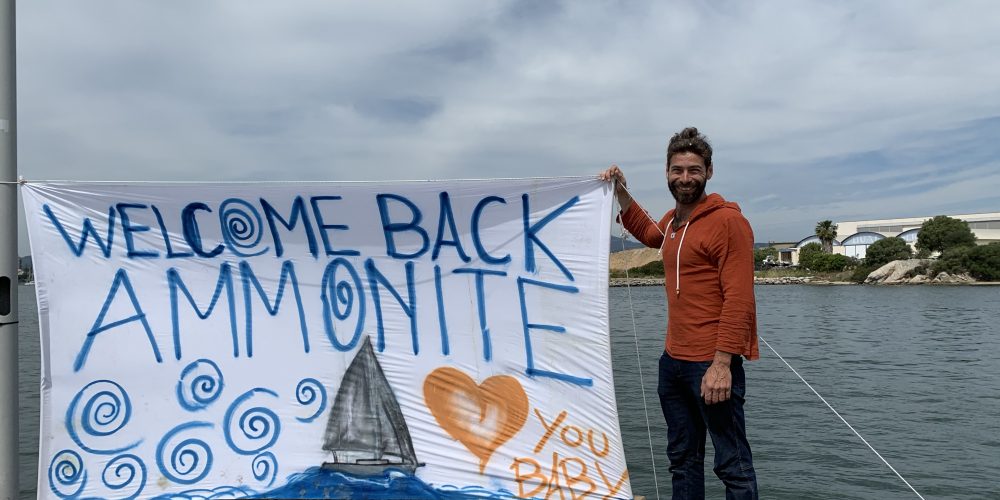 How did you find and select the crew?

I only had four days so I didn’t select, I only tried to find! I needed people who could get to Singapore quickly and who could stay aboard for six weeks right when the summer season in Europe was about to begin. My dear friend and mentor Owen, a semi-retired Captain from New Zealand said he’d join us. His wisdom was added to the enthusiasm of my young crew. So I had Owen, Marcello, Furio, Lionel, Nicola and Arianna. Seven strangers of different ages, sexes and cultures for five stressful weeks.

How did you handle safety?

There are two kinds of pirates: well organized ones who are armed and ready to assault cargo ships and make millions and others who just want to make a quick buck. Ammonite would hold no attraction for the first group, but a 24m yacht wouldn’t go unnoticed by the second. I studied the problem and Marcus has served in the navy and has friends that he can call on for advice. Together we decided to travel unarmed and unaccompanied, but to enrol in UKMTO, a multinational coalition that is based in Somalia and patrols the High Risk Area, dispatching help if it’s needed. Captains who enrol in this program have to leave their AIS transponders on at all times and send a daily email with info on their position, speed and direction. Unfortunately, it was too late for us to join a convoy of other boats and it might have been a good idea to have some cash aboard to appease intruders, but we didn’t have the time to get it. I even envisioned myself welcoming the pirates aboard and feeding them an excellent meal, maybe that would catch them off guard and we could all be friends.We had to stay alert, the whole crew had to do watch duty. We knew that pirates usually use fast boats that are hard to detect by radar so every ten minutes one of us would scan the entire horizon: we knew we were like a limping animal surrounded by jaguars. And since one of our crew was female we had a fake crew list and a “panic room” to hide her in in case of assault.

Which were the most beautiful spots you saw along the way?

Our first leg was Singapore-Galle, Sri Lanka. We left Singapore on April 20th and arrived in Galle a week later stopping just to refuel and get some fresh food. Our second leg was Galle to Port Suakin, Sudan, about 3000 nm in 17 days. We stopped just over six hours after loading 3500 liters of fuel by funneling the contents of 700 50 litre gas cans into our tank. Mohamed, a simple man in a long white tunic, was our saviour and made sure that we got what we needed quickly even though it was Ramadan. Port Suakin is an incredible place, a slice of water that cuts into a desert with green hills in the distance like a mirage. There is just one decrepit building left of a settlement that had been built from local coral that couldn’t stand up to the sea’s constant erosion. Our next leg was Port Suakin- Suez. The Suez Canal has had a significant social and historical impact but for me it was just a logical nightmare, you can’t get anywhere without greasing someone’s palm. We were hoping to go through the day after we arrived but had to wait for a destroyer that was coming through in the opposite direction so the crew had a day off while Owen and I kept watch. Our passage through the canal went smoothly and the pilots that guided us were friendly: after asking us how quickly we could motor they wore us out asking for cigarettes, alcohol and money. All we had to give them were some shirts and caps with Ammonite’s logo but they were a hit. The final leg was Suez- Olbia. After all that time at sea seeing our families again was fabulous! The transfer was no picnic and no pleasure cruise; I’d say that it was more like a mission with a very clear objective. But every minute was worth it. The fatigue, the fear, the sleepless nights and missing our loved ones. It was all worth it because we arrived safe and sound and Marcus was happy too. We did our job and we did it well.

Would you do it again?If so are there any things you’d do differently?

Yes, I’d do it again. Ammonite is a fantastic yacht, easy to maintain, seaworthy and really fun to sail. After having been her captain for three and a half years I knew she could handle the transfer. During monsoon season the Indian Ocean is a perfect place to sail: winds at 20-30 knots from the NE or SW depending, high but long swells that are wonderful for surfing. Maybe I would change the season; if we had left in March from Bali it would have been great. Too bad that we had to race to prepare the yacht, too bad that I didn’t have more time to select and prepare the crew. And it would have been nice if Marcus could have been with us. As far as preparing for pirates goes, at the end of the day, I’m happy that I didn’t do anything beyond getting the UKMTO. The thought of having firearms aboard made me uncomfortable and Marcus agreed. We were thinking for a while of buying barbed wire to put along the lifelines but we all knew that it would have been dangerous for the crew and not very effective against pirates. UKMTO follows every vessel that sends a daily report and has a cell phone number that’s active 24/7 where you can report any kind of problem related to pirates. When you stop to consider that 90% of the world’s commerce passes through the Suez Canal and the Red Sea you understand how it’s in every nation’s interest to protect vessels that use this route. We are now witnesses of how efficient the surveillance system is. 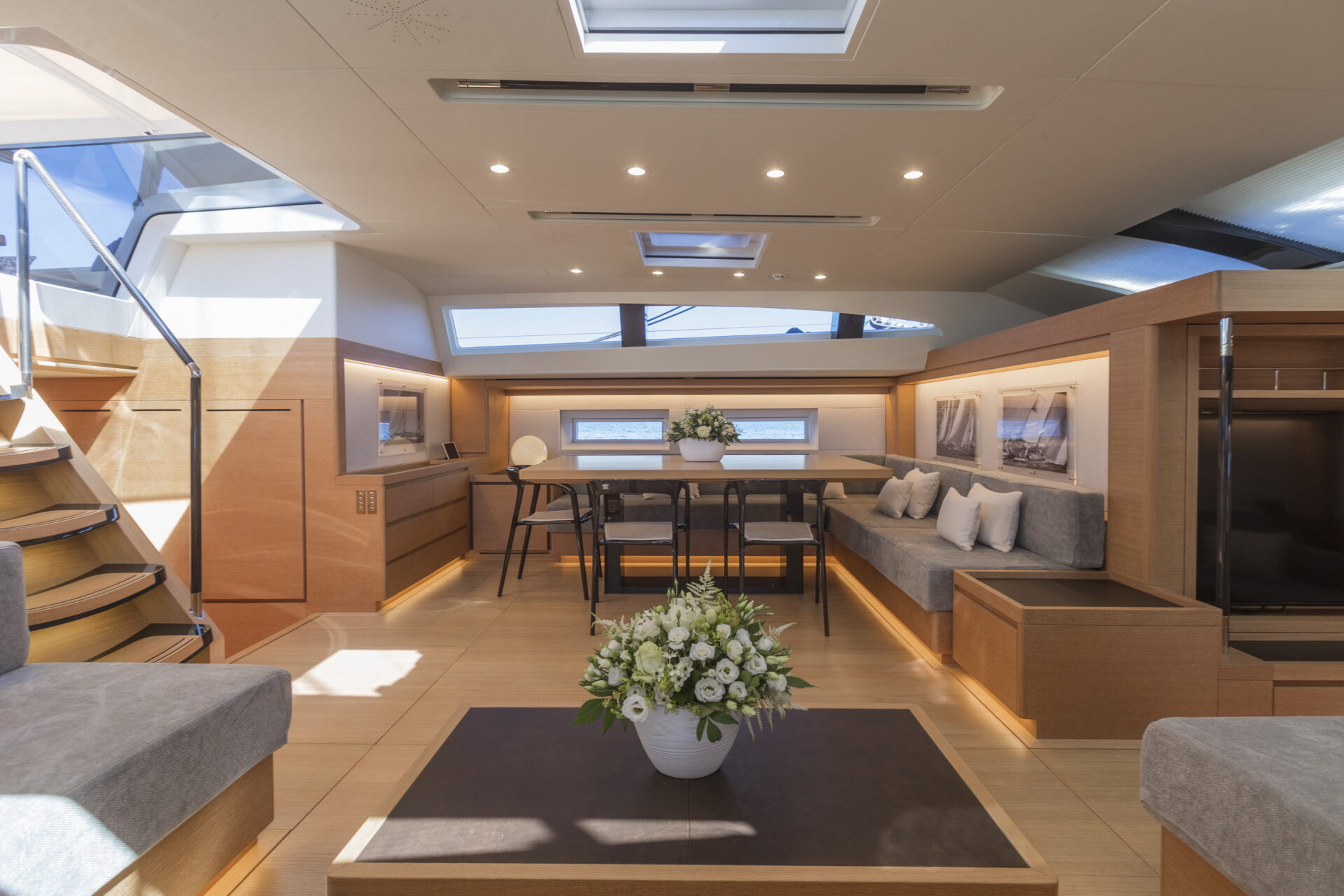 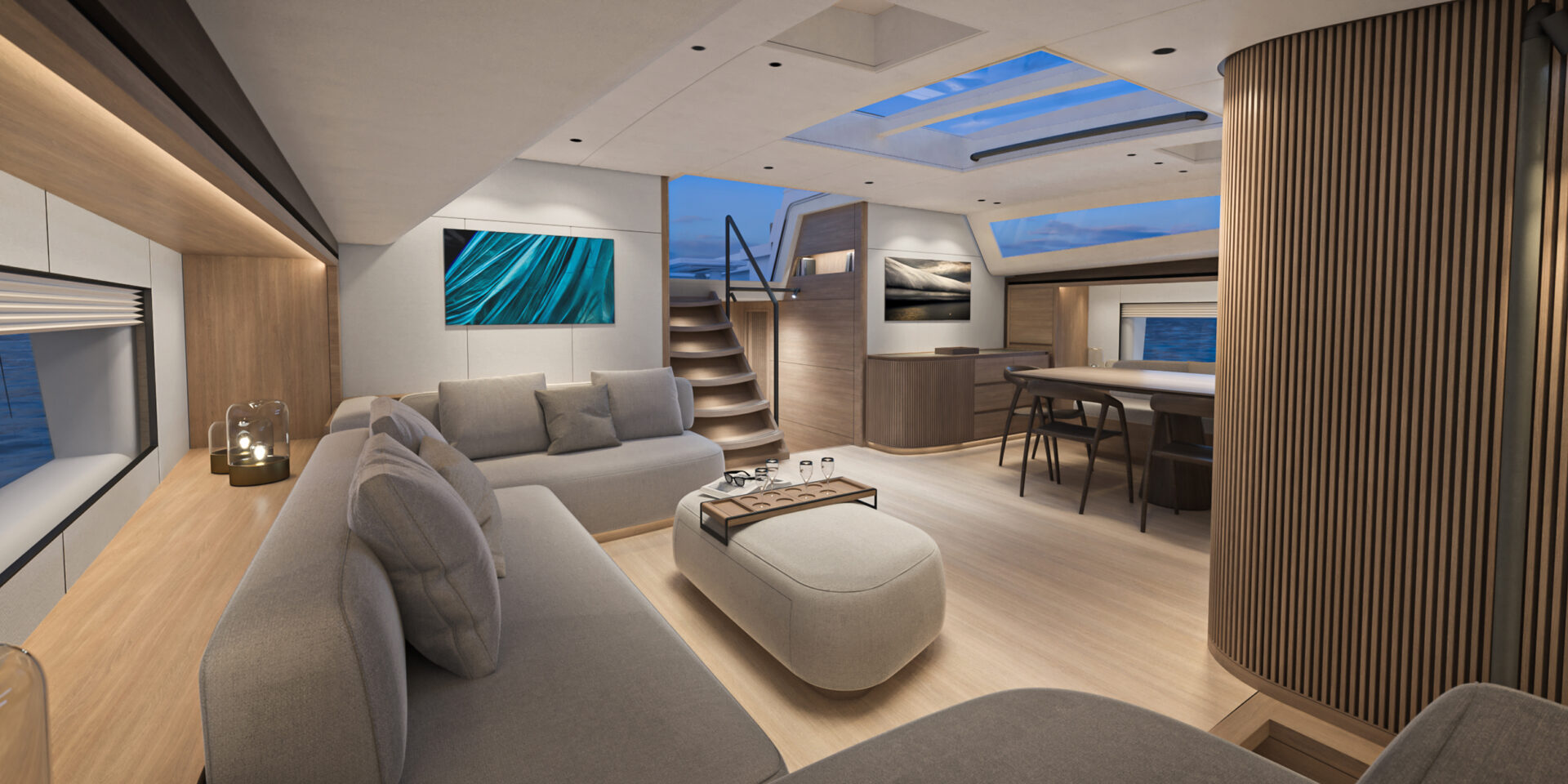 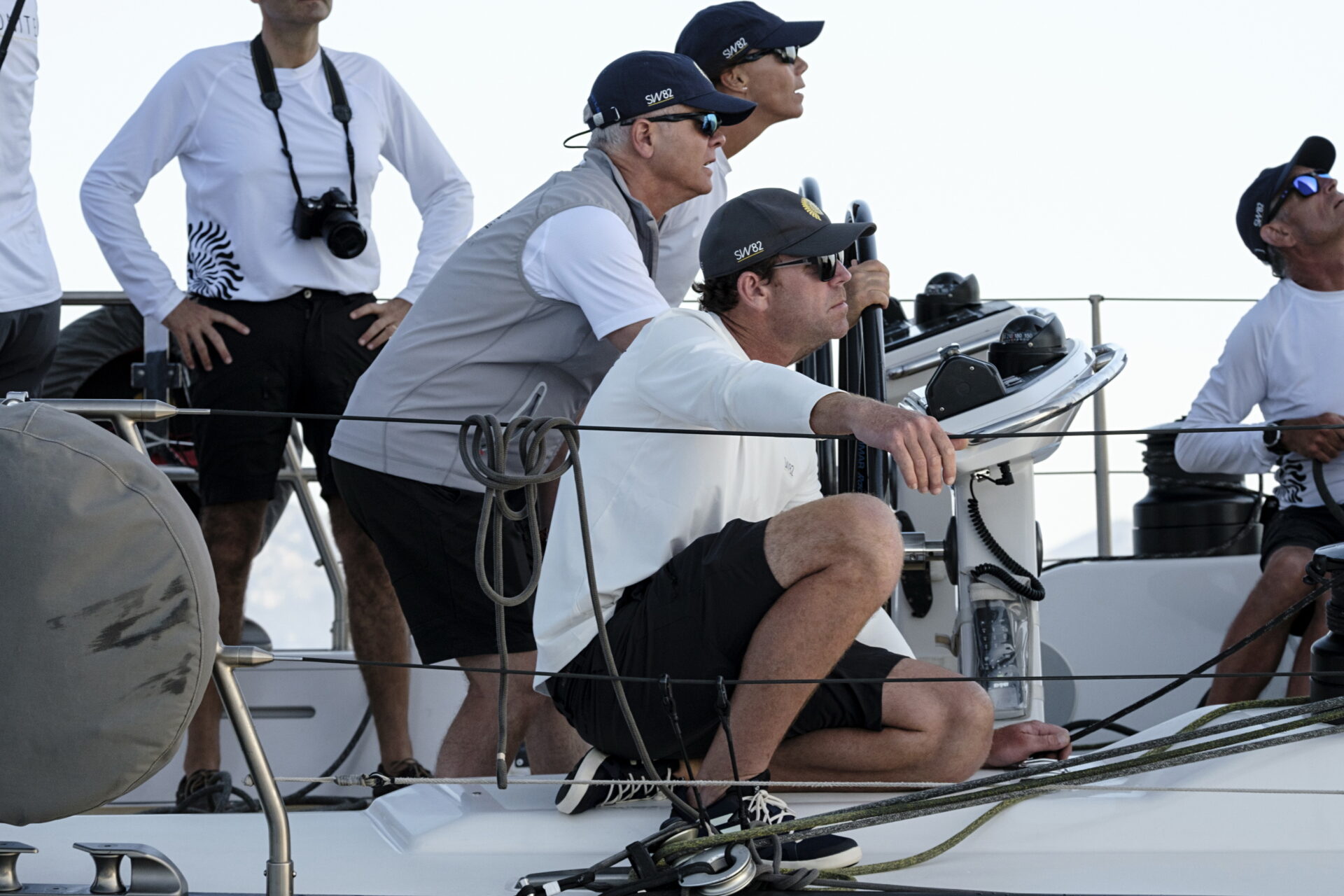 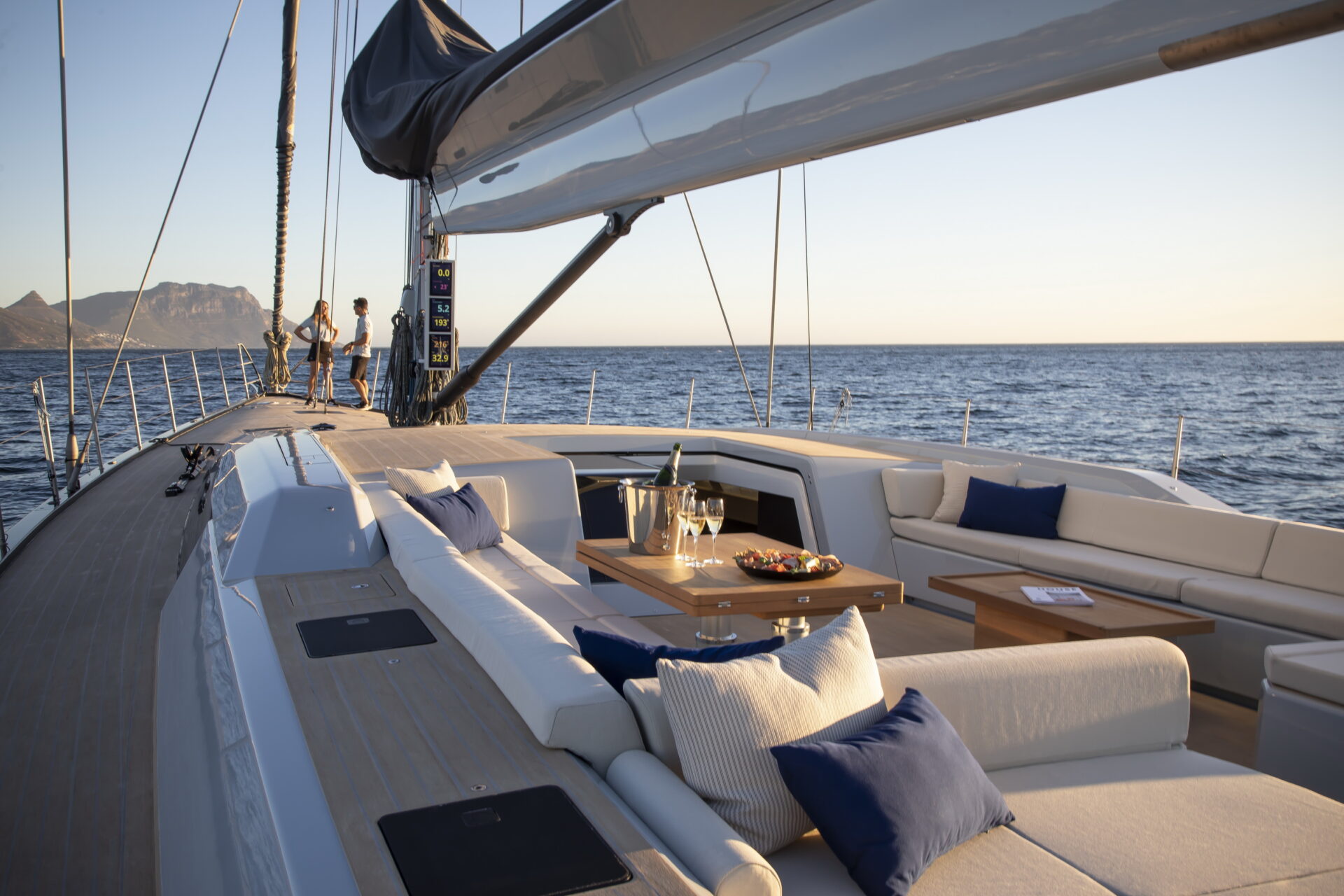